This post is long overdue as it’s a requested topic from my awesome friend P. She asked me to talk about the landvættir/honoring land wights quite some time ago, but as I’ve admitted before, they’ve never been a huge part of my practice because I don’t notice or sense/feel them the way I do the gods and my grandfather. So for the last few months, I’ve been at a loss for words and had no reflections on the matter brewing in my brain.

Clearly, that’s changed. A little back and forth with E the other week changed my perspective entirely as she inadvertently pointed out the ways I actually do honor them. So here we are, finally. This one’s for you, P!

In Norse heathenry, nature spirits and protectors of the home and hearth are landvættir (also known as wights). Being of Norwegian descent, I grew up calling them nisser/nisse. My most treasured family relic is my grandfather’s porridge bowl and cup he brought with him from Drammen; it’s painted with nisser dancing around the edge, and I’ve got a note in his handwriting offering both the literal and idiomatic translations of the inscription inside the cup. 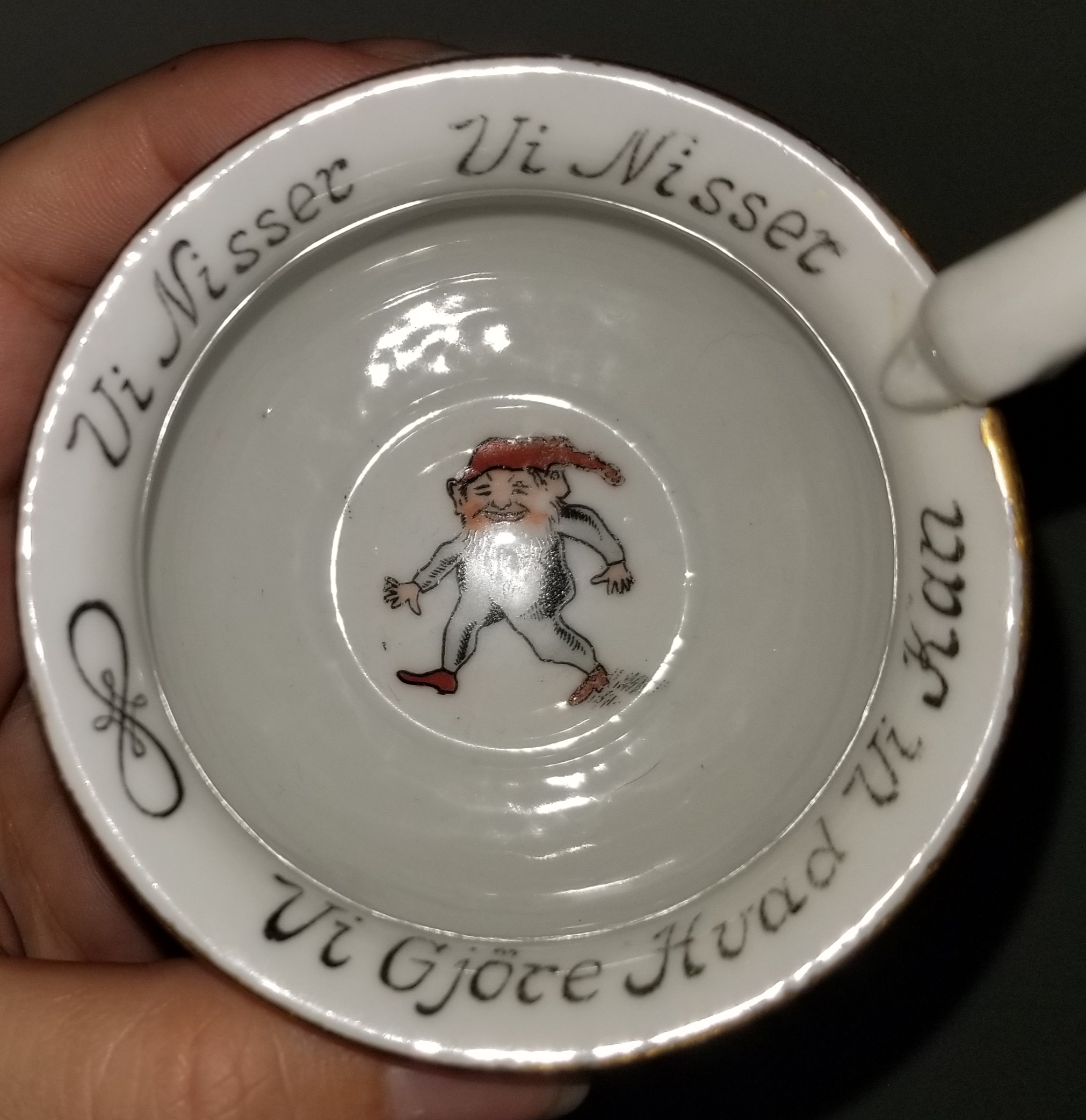 “Vi Nisser, Vi Nisser, Vi Gjöre Hvad Vi Kan,” or “We elves, we elves, we do our best.” The folk tales on which I cut my teeth focused around nisser and their kin, yet I rarely felt too much of a connection with the spirits of the land. I noticed them frequently in Iceland, but often remark that in the United States, the energy (to me) is much weaker and much more confused and jumbled, which makes it incredibly difficult to pick up on things. And to be utterly honest, I’ve always felt silly leaving out a bowl of porridge with a slab of butter melting into it. I’ve obviously got no problems feeling dopey leaving out offerings of sweets and snackrifices, so being weirded out and embarrassed by a bowl of porridge says quite a lot about my relationship with the nisser (or tomte, for you Swedes).

That said, I do leave offerings of tobacco in the woods when I go hiking. The region in which I live and explore is, like most places in this country, heavy with the history of the native Americans, and theirs is the influence I feel when I’m wandering the woods. Tobacco was a traditional offering for the people who were unfairly pushed away from this land, and it feels very right to give tobacco in honor of them and the spirits with whom they communed. It gives me a sense of connection, moreso than I ever get with porridge, and it sparks a little bit of ancestral acknowledgement as well as the Norse were known to make appropriate offerings to local deities and local temples throughout their, uh, travels. Eastern Pennsylvania is not a land of nisser or tomte, but it is a land of the Lenape and Delaware peoples, the Shawnee and the Susquehannock, and I prefer to honor and remember their spirits of the land.

As far as the spirit(s) in my home, the protectors and “helpers,” well, there’s no nisse here. But there is a ghost, or an imprint, of the original owner (and, to make myself sound even crazier, the ghost of her cat also roams the 2nd and 3rd floors of the rowhome. The cat-shade is the reason my mom is afraid of my house thanks to an encounter she had with him overnight several years ago. To this day, she refuses to be anywhere near my house after nightfall. But that’s another story for another day). After noticing her presence shortly after moving in some 11 years ago, I did research on the property: my house was built in 1908, and from ’08 to ’99, it was owned by the same family. Census records matched up with the age/dress of the lady I’d sometimes see from the corner of my eye, and her death certificate confirms she died here. She’s buried in the cemetery about a quarter mile from our home, on the same street, and I found her grave very much by accident. I like to visit her every now and then with an offering of flowers (in the spring, I bring tulips from our back courtyard space), and I thank her for letting me live in her beloved family home and for watching over it. Her presence brings with it a sense of deep love for the house and has a very protective quality about it. Though the house was bought and sold several times between 2000 and 2009, I’m the 2nd longest resident here. I like to think that Nancy approves of me for whatever reason, even if only because I notice her and remember her and decorate her grave.

Following the possum visit earlier this month, E mentioned something about my offerings for nisser and landvættir. I admitted it’s not something I do, but I spoke about the tobacco and flowers I offer. Even though we were communicating via written messages, I’m pretty sure she rolled her eyes at me as she helped me realize that I was honoring land and house wights. I may not call them nisser or landvættir, but they’re still the local land spirits and house spirits watching over and protecting their turf. They don’t care for porridge, but they love tobacco and tulips, so what’s the difference between honoring them and honoring “land wights”? The intent is the same, the action is the same, and the outcome is the same, regardless of what I’m calling these energies I notice and honor.

That’s the thing about following an old European religion in a very diverse country with infinite cultural influences: I thought I didn’t notice the nisser ’round these parts, and had no idea how to cultivate a relationship with them. Turns out that what I’ve been honoring aren’t nisser or landvættir by name, but they’re the eastern North American equivalent. No cheerful little gnomes dancing around with pointy hats and bushy bears in my house, but rather the ghost of the first woman to make this house a home. No elves scurrying through the trees and undergrowth in the forests, but spirits of the trees and plants and water and rocks themselves, along with the memories of the people who first walked among them.

So how do I honor the landvættir? For the last decade, I’ve been sharing tobacco and food with the nature spirits in my favorite hiking spots, and flowers and remembrance for the original resident of my house. For me, leaving bowls of porridge for wights doesn’t work, because that’s not what they want. They don’t want to be called nisser or receive the gifts nisser traditionally enjoy, because they don’t have the connection or context for the language or the offering. They are their own entities, with their own identities and practices and preferences, and honoring them is a matter of paying attention and listening.

This is where experience varies: there are households in the United States that do have nisser/tomte that have followed their families, and swaths of land hosting immigrant landvættir. I know many people who make offerings of porridge and cream to their tomte, many who have created vés for landvættir on their properties. In my corner of my city, I don’t notice nisser. I’ve invited them, but they haven’t come because my place is already protected and looked after by a house spirit. The position has been filled, no vacancy. And it works for us as the Nordic land wight practices work for others. There’s no right or wrong so long as the land spirits are remembered and acknowledged in a way that honors them.

For so long I thought I was a crappy heathen because I didn’t honor nisser the way I do my gods and ancestors. But spiritual practice and connecting with the world we can’t necessarily see has taught me that in some cases (in most cases, actually), it’s not about me. It’s about recognizing what and who is there, and it would be gravely disrespectful to refer to the land spirits and protector ghost as nisser and try to feed them porridge. Where I live, what I experience, it’s not about me: it’s about who came before me, and remembering the entities that remain and honoring them in a context they understand.

Like I said, there are nisser/tomte and other landvættir in the United States. We’re an immigrant nation, and when our forbears brought the gods with them, they brought other beings as well. There could even be Nordic or Germanic landvættir in my own city, and I just haven’t met them yet because my hearth is already claimed by a protective watcher and her cat. If you want to incorporate the land wights into your heathen practice, you can absolutely set up a cozy little corner of your home for them and leave out porridge (with a LARGE pat of butter on it – do NOT skimp on the butter, y’all, or you’ll face the consequences, according to Grandpa Frank). If that doesn’t jive, then be patient and pay attention to what’s around you, and you’ll know what to offer and in what context. Again, whatever name or identity they take in whatever region you call home, it’s about recognizing the work they do to protect the land and the hearth. It’s thanking them for being present and sharing the space and the beauty around us. Whether it be a rosy-cheeked, bushy-bearded tomte or a Lenape tree spirit or an early 20th homemaker, we are surrounded by beings who care for the earth and those who live upon it, and they’re so very deserving of our gratitude.