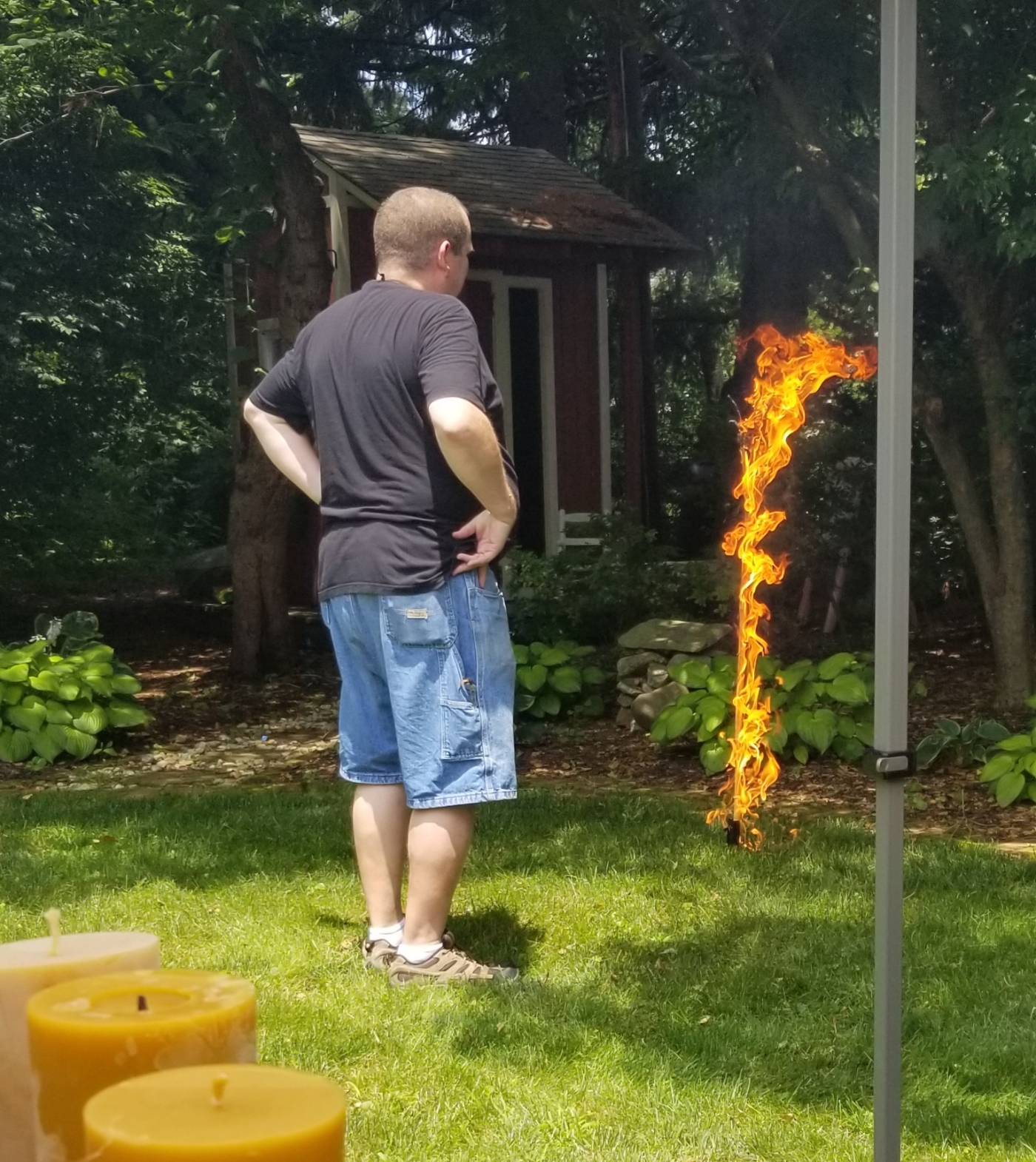 After nearly ten years of celebrating holidays with my local kindred, I’m finally an official member of the family. We had our Midsummer celebration on Saturday, and I was welcomed in an unexpectedly emotional ceremony before the public arrived. I, of course, wasn’t the only one welcomed by the kindred: the doors were opened for Loki, too.

Longtime readers might recall the events that transpired the night the kindred invited me to join. Since then, I’ve (jokingly, kind of) given them plenty of “outs” in case they’d changed their minds about letting one of Loki’s Little Lunatics in. They’re a stubborn bunch, and they repeatedly insisted they wanted me. Hahahaha, k. At least they know what they’re getting themselves into. I mean, they’ve known me for many, many years, and I’m not shy in my adoration of Himself. Over the years, I very respectfully followed their “don’t toast Loki in sumbel, no offerings to him at blot, keep him out of ritual” rule, because I’m hardly about to tell people what to do in their own house, and because I genuinely admired everyone present and understood their past experiences with the Trickster and his followers weren’t the best. Besides, for the longest time, I was a stubborn Odhinnswoman, who just accepted Loki’s constant presence as part of the terms of hanging with Ol’ One Eye. I’d pour Loki a drink when I poured on for Grimnir per lore declarations, and I’d give Loki treats on my own time, but a kindred being Nokian wasn’t a deal breaker for me. A little sad, since I’ve always had a liking for the twerp, and he’d always been good to me, but I understood. He’s not for everyone. I just made up for it upon my return home from kindred events.

Of course, in the last few years, the members of my kindred have started to slowly soften their stance regarding Himself. Their friendship with me and with another Lokean in the region (my extraordinary friend who has been mentioned time and again throughout this blog) have helped them to understand him better and lessen the fear associated with him. When they invited me to join in an official capacity, they told me they’d had some discussions, and they all agreed that they would open up ritual to include Loki. Of course, if you recall, I asked them a few times, “Heh, uh, are you sure? Like, really sure?” Each time they said yes, and then the votive exploded. Mazel tov! That night was the first night I toasted Loki in a kindred sumbel, and the first night I didn’t have to give him a “makeup” offering upon my return home. I still did make an offering when I went home that night, but it wasn’t a “sorry you were excluded, I still love you” deal, it was a celebratory “yay you! Now please don’t make them regret it” deal.

On Saturday, I packed up some of my favorite items from my Loki ve and proudly placed them on the kindred altar for my welcome ceremony. I was already giddy af about everything, and seeing things so precious to us sitting with items so precious to the rest of the kindred and their fulltruis sparked extraordinary elation. It sparked Loki’s too. As I snapped a pic of the altar, I heard G mutter, “Well that’s not supposed to happen.” We all look over to see him standing next to the tiki torch that was closest to the altar, hands on his hips, shaking his head. As evidenced above, the entire thing was aflame, top to bottom, burning a nice little patch into the grass.

Not a single one of us was even slightly surprised. Instead, we all dissolved into laughter and hailed Loki, because of course. The altar was set, he had arrived, and he was ready to break open the mead. But before that could happen, we made the unanimous decision to officially incorporate a Ritual Fire Extinguisher into the kindred gear.

There were nearly a dozen tiki torches ringing G’s yard. They’re lit every time we gather. There was absolutely no coincidence that the one next to the altar spontaneously combusted the moment we finished setting up. And the sound of everyone’s laughter was nothing short of pure magic – it was the moment I knew for sure that my brothers and sisters were truly welcoming Loki into the fold.

Later, when we held sumbel with everyone else (including an “away team” from an out-of-state kindred), it was the greatest honor as the newest member to open with a toast to Loki. As I held the horn, I echoed what I’d said earlier, when it was just the kindred: “To my beloved Loki, Truth-Forcer, World-Breaker. My world has certainly been broken, time and again. My family has been broken. My body has been broken, and my heart has been broken. But thanks to Loki, my soul has never broken. He has never left my side, he is truly the most compassionate. And I am more grateful than anyone can know that my brothers and sisters accept me, and welcome him. It’s because of them that I am so thrilled and so humbled to raise this horn with you and say . . . HAIL LOKI!” The goosebumps I got when everyone present echoed an enthusiastic hail to him reappear each time I think of it. He is well pleased, and I am glad beyond expression for it.

Afterwards, I was approached by one of our guests, who was incredulous that the kindred had reversed their stance on Loki. He and his wife were fairly local, and he told me that they hadn’t wanted to join any local kindreds because of the Loki bans so many of them had in place. They knew this kindred used to be Nokian, and wanted to know how and when they’d changed their minds. He and his wife and I enjoyed most of the evening talking about our experiences with Himself and his family, lamenting the fact that none of them are given much of a chance in the American heathen community, our hearts breaking over and over as we acknowledged the sorrow he felt at being excluded, by the fact no one ever sings for him. I very nearly burst into tears when she told me about the time he (and she) wept at a ritual in which Hel was included, but he had to remain outside the event. I could feel a father’s pride at how beloved his daughter was by the community, and his anguish that he himself couldn’t be present to celebrate with her. It’s an anguish I’m well familiar with, one I experience again and again. It is, thankfully, an anguish that lessens each time he’s finally welcomed.

As sad as much of the conversation was, I was beyond grateful to speak with others who love Himself, and who feel and know his love for his family, his tenderness with his people, and his pain at being shunned. And they, I think, were very glad to be present at sumbel where he was hailed, where he was toasted, where he was appreciated. The fear is fading in the American community, and we celebrate those who are willing to listen, to understand that Loki has shouldered the burden that was entrusted to him, and that he’s worth loving (or at least liking).

There’s still resistance, but our adored little twerp is finally getting to be with his family and his friends at ritual. We are starting to sing for him, we are coming together as a community to share our gratitude and our mead, make our offerings, and welcome the blessings and lessons he has to offer. And, of course, to laugh at his antics. Exploding votives, tiki torches gone wild. . . all good fun, so long as no one gets hurt. [Side note: I’m suddenly reminded of what I wrote in my journal in my senior year of college. Fall 2003 is when I really started noticing Loki’s strengthening presence, and in spring ’04 I’d written something about how all the seniors were starting to feel burned out, and then there was me, who was just going to get burned up. Fire gods, yo. Hence the shiny red Ritual Fire Extinguisher.]

And to my kindred: I cannot possibly be more grateful and indebted to you for welcoming Himself when you welcomed me. You, my long time friends and new brothers and sisters, have done great things, and continue to do so, and I don’t know that I could ever love you any more than I already do. Hail the community!

2 thoughts on “Surprise! (Spoiler: No One Was Surprised)”